The N.E.C. shows are the largest of their kind in the U.K. and are always popular, but this year, for the first time, numbers were restricted to 19,000 visitors per day on each of the six days of the event, and entry was by pre-booked ticket only. With more than a week to go, every single ticket had been sold! Usually, mid-week sees an attendance of roughly 12,000 visitors, so you can see how keen people were to attend this show.

Over the past couple of years caravanning and motorhoming have become increasingly popular as those who usually fly to warmer holiday destinations have been unable to do so, so have turned to ‘staycations’, and many newcomers are realizing the benefits of owning a caravan or motorhome.

The main U.K. caravan/motorhome manufacturers were represented at the show, having their own stands, the notable exception being the largest manufacturer here, Swift. However, the company did support many of its dealerships who were displaying the Company’s models. For some manufacturers, a good number of their 2022 models had sold out and prices for the 2023 versions, due to be launched to the public in September this year, were being advertised. 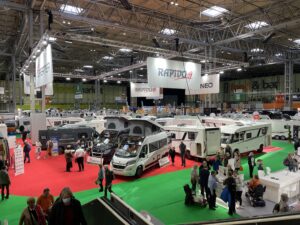 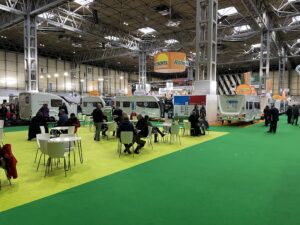 There were one or two new vehicle launches at the show too including Bailey of Bristol’s new wide-bodied Alicanto caravans and Coachman’s new Travel Master motorhomes, the latter built in collaboration with Swedish manufacturer Kabe. For many visitors it was the first time that this year’s models could be viewed, rather than only seeing photographs on websites.

The Continental manufacturers were also well represented too. If they didn’t have their own stands, many models were displayed by either importers or dealerships. Adria unveiled their new Alpina range of caravans, and Polish manufacturer Freedom showed us their quirky and lightweight Carpento caravans for the first time too. 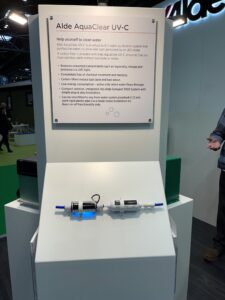 Moving onto accessories and suppliers to the industry, these were also very well represented, with most of the ‘big players’ attending. Of course, Alde were there to answer question after question about the products, either systems fitted to vehicles or the many brilliant accessories that are available to retrofit; back-up battery, load monitor, external/remote temperature sensors and the superb Flow to name but a few. The show was also the venue for the launch in the U.K. of the new Alde AquaClear water purification unit which can be fitted to most fresh-water systems. I look forward to investigating this further in the coming months.

All in all, the February Caravan, Camping and Motorhome 2022 was a huge success, and I look forward to the return of the October show when all the 2023 caravans/motorhomes will be on display together with some other new products from Alde!

Nigel Hutson, a lifelong caravanner from Chesterfield, Derbyshire in England. Purchased his first caravan in 1984 and has since then toured the UK and Continent on a regular basis, alongside his wife Kay. In addition to being a husband, he is also a father and grandfather.

Since retiring from the police in 2011 Nigel has become a regular contributor to various caravan and motorhome publications, as “someone who enthusiastically writes about their hobby rather than a journalist”. Nigel is also a keen musician, enjoys travelling and has a great interest in all forms of transport… and he is a Manchester City fan.

Two dear customers, Nigel and Kay, sends us a Christmas letter from their annual trip to York. It got all of us at Alde in to the proper hol...

Winterizing the Alde water system is a simple but very important task and should be carried out when the vehicle is not being used and there...